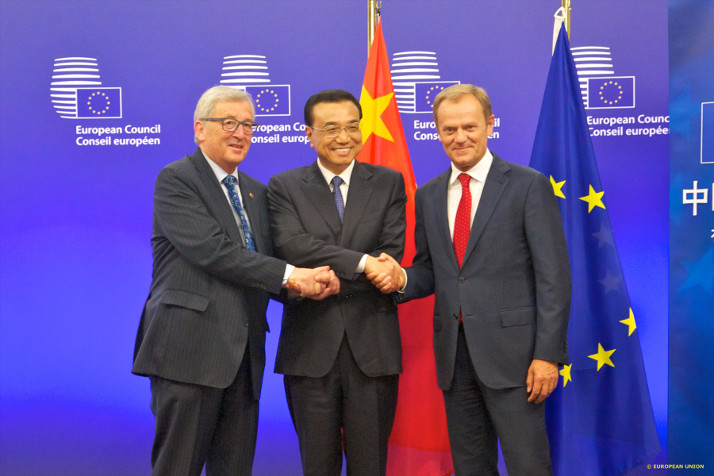 The 21st EU-China summit was held in Brussels last April, as a further stage in the complicated negotiating process aimed at strengthening the EU-China strategic partnership, at both bilateral and multilateral level.

The bilateral Sino-European cooperation has a rather recent genesis, which is worth summarizing in order to better understand how the goals of the last rounds of negotiations were reached.

It is 1995 when the European Commission publishes the first of a series of papers entirely dedicated to China. The document lays the foundations for that constructive engagement that, even today, represents the negotiating philosophy with which Brussels looks at Beijing: the concrete interest in the Chinese market and its great opportunities cleverly supports the aim of bringing China politically closer, in order to increase the international weight of the Union itself. In this perspective, individual Member States and the EEAS cooperate synergistically: the ones pursue their own specific interests within the framework of the general goals of the Union; the other, together with the Commission, undertakes to set up an adequate regulatory framework for potential bilateral negotiation arrangements, while maintaining an ongoing supervision over compliance with high standards such as respect for human rights, the rule of law and democracy, through a constant and close dialogue with Beijing.

To this constructive engagement China has historically reacted in a pragmatic way, through a dual strategy: on the one hand, it benefits from the divisions existing between the Member States, even threatening commercial retaliation against those States openly critical of the Chinese government or excessively attentive to the effective respect of a whole range of non-trade values; on the other, strongly supporting the process of European integration, in the hope of building a stronger political and economic Europe able to support that multipolar order, which is, as well known, the Chinese foreign policy’s purpose since 1949. This dual approach towards the EU, far from being contradictory, has de facto brought enormous benefits to China.

The strategic partnership signed in 2003 remains the last relevant negotiating achievement in the recent history of Sino-European trade relations.

The strategic significance of this bilateral arrangement, however, was not confined to technological and defence issues, but also involved the euro. In the autumn of 2003, the EU and the Chinese Central Bank signed an agreement which led Beijing to diversify the basket of foreign currency reserves, gradually increasing -but steadily over the years- exposure to the European currency, at the same time decreasing the one towards dollar. This process has had important political implications during the recent sovereign debt crisis: China has placed substantial confidence in the resilience of the euro zone and in the attempts at reform carried out by European governments and has invested heavily in European manufacturing companies, including the Italian ones, with the aim of acquiring know-how and technologies as essential assets for the modernization of the Chinese industry. At the end of 2014, China had invested about $ 54 billion in companies listed on European stock exchanges, ranking fifth in terms of investment entities, immediately after Japan.

Furthermore, the recent interest towards Italy and the countries of southern Europe must be seen in the context of the Chinese ambitious project for the implementation of the Belt and Road Initiative (BRI), launched by President Xi Jinping in the autumn of 2013. However, to date, the EU is China’s first trading partner and, for that reason too, the Mediterranean is considered the natural landing place of the new maritime silk road.

Moreover, the rapid increase of Chinese foreign direct investment in the EU is one of the reasons for the escalating competition between Member States. The worsening of the economic crisis and the need to attract foreign investments have led many countries to independently manage their own relationships with Beijing, by adopting a typically bilateral approach which, of course, decreases negotiating power, if compared to negotiations conducted at the supranational level.

As a direct consequence of this policy, some ad hoc consultation forums have been established with China’s institutional players with the aim to promote economic cooperation and bilateral investments, among them the so called “16 + 1”, i.e. the annual meeting between the 16 countries of Central and Eastern Europe and China; the Nordic Countries Group and the Southern European Countries Group, which includes Italy.

It goes without saying that this political fragmentation can only further strengthen Beijing’s divide et impera policy, which survives alongside the commitment to promote a strong and cohesive EU, as such able to contain US hegemony.

For what concerns the evolution of such cooperation, the Council, in December 2005, after a rather long period of stalemate in Sino-European relations, approved a negotiating mandate for a new trade agreement with China.

The negotiations have formally begun with the EU-China summit of 21 November 2013, in Beijing. The purpose of the Investment Agreement, in particular, is to remove the barriers that hinder access to the investment market and, at the same time, to ensure a high level of protection for investors and investments both in China and in the EU. In 2016, the Parties reached a deal about the broad scope of the new Agreement, establishing a common negotiating text to work on. The negotiation rounds continue today with continuity. Once in force, the Agreement will replace the 26 BITs currently in force between the 27 Member States and China. Negotiations are also at an advanced stage with regard to an Agreement on geographical indications, which will complement the one relating to investments.

Furthermore, separate discussions were launched in 2007 for the reform of the Partnership and Cooperation Agreement (PCA) of 1985 – which is different from the strategic partnership of 2003 –, currently stalled since 2011, due to irreconcilable differences between the negotiating positions of the Parties, notably in the fields of IPR and market access for goods, services, investments and public procurement.

It is precisely on this relational background, albeit briefly retraced, that the 21st summit was ultimately called, with the aim of strengthening the EU-China strategic partnership.

The leaders reaffirmed their common commitment for multilateralism and a rule-based trade and renewed their joint effort to co-operate on WTO reform, in order to ensure its continued relevance and allow it to address global trade challenges.

The European Union, indeed, is strongly determined to pursue a fair, balanced policy of mutual benefit with partners around the world.

The summit was therefore the occasion to reaffirm commitments already made and guidelines already outlined: in addition to the joint statement, which testifies the solid cooperation established, further concrete results were produced, among which it’s worth mentioning the memorandum of understanding concerning state aid control and the analysis system of the competitive balance, which is particularly relevant in the actual implementation of a purely commercial cooperation; the  agreement containing the mandate for the EU-China dialogue about competition policy; a joint statement concerning the implementation of Sino-European cooperation in the field of energy; a mandate to forge synergies for the identification of the most sustainable rail transport corridors between Europe and China, as a fundamental step of the BRI mentioned above.

However, the purpose of the more properly commercial negotiation remains, as already highlighted, the maintenance of the rule-based multilateral trading system, as a privileged forum for concerting action necessary for the expansion of cross-border trade and bilateral as well as multilateral investments.

Precisely in this direction, on the occasion of the previous summit (XX Summit, July 2018), the Parties set up an ad hoc working group on WTO reform, also tasked to draw up proposals aimed at strengthening international standards in the field of industrial subsidies, which is, as is known, a particularly difficult subject in the context of the complicated competitive relationship with the Chinese economy.

The EU and China have also recognized the importance of pursuing the further – but equally essential – objective of applying mutuality in widening non-discriminatory access to their respective markets.

For what concerns the aforementioned investment agreement, which is a high priority in the maintenance of an open, predictable, fair and transparent global trade environment, substantial progress has been achieved, thanks to the commitment of the leaders towards the conclusion of the negotiations by 2020.

Furthermore, the dialogue on state aid control represents a useful consultation, cooperation and transparency mechanism between China and the EU aimed at regulating this complex issue, particularly strategic in the implementation of an effective competitive structure. However, this initiative is part of the Commission’s wider strategy aimed at limiting distortions caused by national subsidy policies, which are significantly detrimental to market equilibrium and level playing field among competitors.

However, it is worth noting that cooperation between the EU and China maintains a broader purpose and goes beyond purely commercial consultation: from the joint commitment to climate protection and environmental sustainability, to the common support to the global action plan towards the Iranian nuclear program. From the shared sense of purpose over a whole series of international dossiers, such as – and merely by way of example – the two-States solution in the Middle East, the efforts towards a lasting peace solution to the Syrian conflict and the stabilization of the Libyan area, the support for the complicated peace process in Afghanistan, to the promotion and protection of a wide range of non-trade values; which proves that the increasingly successful – even if complicated- dialogue between the two giants of the global economy is not limited to – nor could it be limited to – the mere implementation of more effective trade relations, but rather involves broader political and diplomatic issues which are, in any case, highly topical.

Furthermore, the EU, on the occasion of the summit, underlined the opportunity to cooperate with China in order to identify international rules useful to counter illegal cyber activities, with particular focus on IPR infringements, so as to finally ensure an open, safe and balanced cyber-space.

The leaders have also recognised the crucial role that 5G networks will play in the future economic and social development of their countries. In this regard, on 26 March 2019 the Commission asked all Member States to make a thorough risk assessment when introducing 5G networks, by taking appropriate security measures. As usual, even on this point, the Commission suggests to operate in a coordinated manner at supranational level.

Lastly, it is worth noting that the EU, in the laborious but virtuous implementation of its common commercial policy, has been working for some time with the specific purpose of using the tools of transnational trade as a vehicle for the promotion and protection of an ever wider range of non-trade values far beyond the borders of the Union, coherently with the very high environmental, social, labour and human rights protection standards – as already guaranteed by the Member States –, sometimes through an efficient policy of conditionality, sometimes by obtaining (re)assurances on the outcome of bilateral or multilateral consultations with the different institutional partners worldwide.

Consequently, during the negotiations for the new Sino-European partnership, the Union’s representatives granted priority to human rights protection (including, in particular: the rule of law, democracy and workers’ rights), proving once again that, in addition to the indispensable dialogue concerning purely commercial issues, survives an increasing attention to more political matters, which is the approach that the EU carries out to effectively guide the global governance, in synergy with the other supporting institutional actors of the international arena, with vision, commitment and changing fortunes.