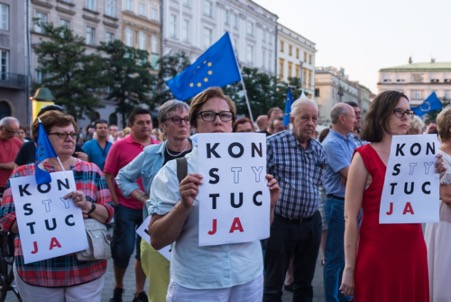 On the 31st of March the European Commission referred Poland to the European Court of Justice regarding the law on the judiciary. The Commission had already sent two letters of formal notice and two reasoned opinions that were not meant with satisfactory responses. Additionally, the Commission asked for the issuing of interim measures before the final ruling.

In the last four years, Poland has been referred to the ECJ various times for issues the Commission has found with the independence of the Polish judicial system. In July 2017 an infringement procedure was launched regarding the Polish law on the ordinary courts. This law affected the retirement age of judges of ordinary courts and public prosecutors. The Commission found that this law hindered the independence of the judicial system. The ECJ ruled fully in favor of the Commission’s views and Poland then removed the contested provisions.

Similarly, an infringement procedure was set in place in July of the next year regarding the Polish law on Supreme Courts. This law once again reduced the retirement age of judges of the Polish Supreme Court. In order to continue working past their retirement age the judges would have to submit a declaration that would have to be approved by the President of the Republic. The Commission believed this also affected the independence of the Polish legal order. The Court then ruled fully in favor of the Commission and the Member State had to, yet again, remove the contested provisions.

It must also be stated that near the end of 2017, the Commission triggered the Article 7 procedure for the first time against Poland. It did so through the submission of a Reasoned Proposal to the Council for the establishment of a clear risk of a breach of the principle of the rule of law on behalf of Poland. Not only: the special monitoring procedure of the Council of Europe has also been applied to the Member State for analogous reasons.

This current case, however, regards the new law on the judiciary that came about after the 2019 Polish amendment to the legislative acts governing the functions of the State’s judicial system. The Commission found that the new Polish law on the judiciary was incompatible with EU law.

The new law is incompatible with rights present in the Charter as well as the General Data Protection Regulation, namely the right of resect to privacy and the protection of personal data. This is due to the requirement that judges disclose information for the purposes of publication about specific non-professional activities.

The law is also in violation of the fundamental principle of the primacy of EU law seeing as it prevents the courts from functioning fully independently and from requesting a preliminary ruling on questions of independence to the ECJ. In addition, it is in violation of Article 19 of the TEU as well as Article 47 of the Charter, which together guarantee an effective remedy before an independent and impartial court. This includes threats to Polish judges on the use of disciplinary proceedings against them. The issue regarding preliminary rulings arises because the law places the independence of the judiciary fully in the hands of the Chamber of Extraordinary Control and Public Affairs of the Supreme Court. This seeing as it is the only body that has the competence to rule and judge issues on the matter. This automatically denies all other Polish Courts from ruling on these subjects and requesting preliminary rulings.

The Disciplinary Chamber of the Supreme Court on the other hand is given immense amounts of power. It controls judicial immunity, the retirement of Supreme Court judges, matters related to labour law and social security. This yet again hinders the full independence of the system seeing as this Chamber has strong effects on the careers and status of judges.

It must be noted that this case began in April of the past year by issuing a letter of formal notice on behalf of the Commission. Having found the response to the letter less than satisfactory the Commission issued a reasoned opinion followed by one more letter of formal notice and another reasoned opinion. The second letter included new reservations regarding the types of cases the Disciplinary Chamber of the Supreme Court was handling. Giving this Chamber powers that directly affect judges and the practice of their activities whilst not guaranteeing its independence and impartiality compromises the courts from providing a fair trial as called for in Article 19 TFEU and Article 47 of the Charter. Poland replied to this letter without addressing the above mentioned concerns and therefore an additional reasoned opinion was sent.

The Commission has now referred the case to the ECJ and requested that in the mean while specific interim measures be applied.

Following this announcement Věra Jourová, the Commission vice-president in charge of values and transparency, stated: “Rule of law and judicial independence are neither left-wing or right-wing […] In simple terms, making the judicial system increasingly dependent on the will of politicians decreases control over what those politicians do and is not a direction that will restore the trust of citizens in the judiciary”.

It must be stated that earlier, on March 29th of this year, the Polish Prime minister Mateusz Morawiecki launched a petition to the Polish Constitutional Court for the superiority of Polish constitutional law over EU law. This has the objective of legalizing the changes to the judiciary made by the government and “This is PolExit from the EU legal order” according to deputy Commissioner for Human Rights Dr. Hab. Maciej Taborowski.

This petition followed the ECJ response to questions from the Polish Supreme Administrative Court. In 2017 the Council had asked for an assessment of several provisions present in the Act on the National Council of the Judiciary which changed the procedure of appointing its members. The ECJ held that amendments to this Act which led to the abolition of effective judicial control of the Council’s decisions to present proposals for the appointment of candidates for Supreme Court judges to the president may be in breach of EU law.

A Member State is required to halt the application of provisions if it is aware, they are a breach of EU law.

Overall, it is clear that the situation at hand in Poland is far from over. As said by the EU Commissioner for Justice Didier Reynders in a statement, “Since it was not possible to resolve our concerns on the law on the judiciary with the Polish authorities, the Commission decided to seize the European Court of Justice on this matter. More broadly speaking, the Commission continues to monitor the situation of the rule of law in all Member States, including in Poland […]We are doing so via the rule of law mechanism […] to create a rule of law culture, to prevent rule of law issues from arising or deepening, and to resolve those that exist”.